The area under the receiver operating characteristic (AUROC) is a performance metric that you can use to evaluate classification models. AUROC tells you whether your model is able to correctly rank examples:

AUROC is thus a performance metric for “discrimination”: it tells you about the model’s ability to discriminate between cases (positive examples) and non-cases (negative examples.) An AUROC of 0.8 means that the model has good discriminatory ability: 80% of the time, the model will correctly assign a higher absolute risk to a randomly selected patient with an event than to a randomly selected patient without an event.

How to interpret AUROC (ref)

The figure above shows some example ROC curves. The AUROC for a given curve is simply the area beneath it.

How to calculate AUROC

In the following figure, which shows ROC curves calculated on real data, the use of discrete decision thresholds is easier to appreciate in the jagged nature of the ROC curves: 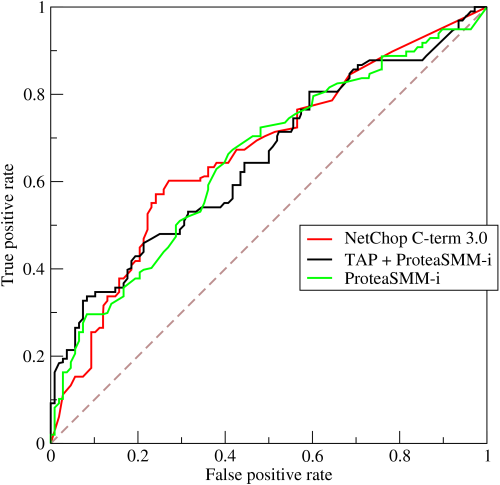 In practice, you don’t need to write code to calculate the AUROC manually. There are functions for calculating AUROC available in many programming languages. For example, in Python, you can do the following:

First, you provide to the function sklearn.metrics.roc_curve() the ground truth test set labels as the vector y_true and your model’s predicted probabilities as the vector y_score, to obtain the outputs fpr, tpr, and thresholds. fpr is a vector with the calculated false positive rate for different thresholds; tpr is a vector with the calculated true positive rate for different thresholds; thresholds is a vector with the actual threshold values, and is just provided in case you’d like to inspect it (you don’t need the explicit thresholds vector in the next function.) The vectors fpr and tpr define the ROC curve. You then pass the fpr and tpr vectors to sklearn.metrics.auc() to obtain the AUROC final value.

When to use AUROC

The AUROC is more informative than accuracy for imbalanced data. It is a very commonly-reported performance metric, and it is easy to calculate using various software packages, so it is often a good idea to calculate AUROC for models that perform binary classification tasks.

It is also important to be aware of the limitations of AUROC. The AUROC can be “excessively optimistic” about the performance of models that are built for data sets with a much larger number of negative examples than positive examples. Many real-world data sets fit this description: for example, you would expect that in a data set drawn from the general population, there are many more healthy people (“negative for sickness”) than diseased people (“positive for sickness.”) In these cases, where true negatives dominate true positives, it may be difficult to use AUROC to distinguish the performance of two algorithms.

Key takeaway: AUROC is a useful metric, but you should be aware that AUROC does not capture the effect of a large number of negative examples on an algorithm’s performance. An alternative performance metric that will not be “swamped” by true negatives is area under the precision-recall curve (AUPRC), which will be discussed in a future post.

Reference for this section (and a great resource for additional in-depth discussion): The Relationship Between Precision-Recall and ROC Curves

What if my model predicts more than two classes?

You can calculate the AUROC for each class separately, e.g. pretend that your task is composed of many different binary classification tasks: Class A vs. Not Class A, Class B vs. Not Class B, Class C vs. Not Class C…etc.

The most common abbreviation for the area under the receiver operating characteristic is just “AUC.” This is poor terminology, as AUC just stands for “area under the curve” (and doesn’t specify what curve; the ROC curve is merely implied). Hence, in this post, I’ve preferred the abbreviation AUROC. You may also see the AUROC referred to as the c-statistic or “concordance statistic.” 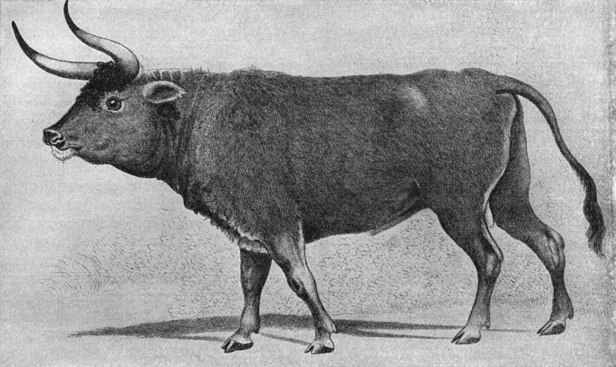 The picture above shows an “auroch” , not to be confused with an “AUROC” :). The auroch is a now-extinct species of cattle that used to live in North Africa, Europe, and Asia. (Nature trivia brought to you by another member of Duke +DS who reminded me of aurochs in a discussion of the “AUROC” abbreviation.)

The end! Stay tuned for a future post about AUROC’s cousin, the AUPRC.