Have you ever wondered how to demonstrate that one machine learning model’s test set performance differs significantly from the test set performance of an alternative model? This post will describe how to use DeLong’s test to obtain a p-value for whether one model has a significantly different AUC than another model, where AUC refers to the area under the receiver operating characteristic. This post includes a hand-calculated example to illustrate all the steps in DeLong’s test for a small data set. It also includes an example R implementation of DeLong’s test to enable efficient calculation on large data sets.

Elizabeth Ray DeLong is a statistician and professor at Duke University. In 1988 she published a test for determining whether the AUCs of two models are statistically  significantly different. This test has come to be known as “DeLong’s test.”

Conveniently, both papers use similar notation, which is the notation we will use in this post.

Definitions of Sensitivity and Specificity

To understand how DeLong’s test works, we need to start with some notation. We will get used to this notation by using it to define sensitivity, specificity, and AUC.

Using this notation, we can write out the definitions for sensitivity and specificity:

This means that as we vary the decision threshold z, we will vary the sensitivity and the specificity.

Definition of AUC and Calculation of Empirical AUC

The area under the ROC curve, or AUC, provides a single number to summarize of the model’s performance across all the different decision thresholds.

In the paper, DeLong et al. describe a method in which an empirical AUC “is calculated by summing the area of trapezoids that are formed below the connected points making up the ROC curve” (ref).

We can calculate the empirical AUC (represented as “theta hat”) with the trapezoid rule as follows:

The function psi(X,Y) is also known as the Heaviside function (with the half-maximum convention).

For additional background on sensitivity, specificity, and how to construct a ROC curve, please see this post.

Connection between AUC and the Mann-Whitney Statistic

In a previous post, I described the AUC as follows:

As it turns out, this definition is true because empirical AUC is equal to the Mann-Whitney U-statistic. To quote from DeLong et al.,

When calculated by the trapezoidal rule, the area falling under the points comprising an empirical ROC curve has been shown to be equal to the Mann-Whitney U-statistic for comparing distributions of values from the two samples. […] The Mann-Whitney statistic estimates the probability, theta, that a randomly-selected observation from the population represented by C2 [healthy people] will be less than or equal to a randomly selected observation from the population represented by C1 [sick people].

To phrase the same point yet another way, Wikipedia describes the Mann-Whitney U test as:

The DeLong Test to Compare AUCs of Two Models

Now that we’ve finished defining the empirical AUC and all the notation, we can move on to a description of how DeLong’s test determines whether one model has a statistically significantly different AUC from an alternative model.

Here is a toy test set of five patients with predictions from two models. We will use this toy test set for the worked example:

Notice that Model A is a classifier with perfect AUC (which will be explicitly demonstrated later), because all of the healthy patients have lower disease probability than all the sick patients. Model B does not have perfect AUC.

Following the notation of the papers, the total number of models being considered is 1 <= r <= k where k = 2 (because we are only considering 2 models here.) n = 2 (the number of healthy patients) and m = 3 (the number of sick patients.)

Under the null hypothesis, z can be well approximated by the standard normal distribution. Therefore, if the value of z deviates too much from zero, e.g., z > 1.96, it is thus reasonable to consider that [theta(A) > theta(B)] with the significance level p < 0.05.

In other words, if z deviates too much from zero then we can conclude that Model A has a statistically different AUC from Model B with p < 0.05.

To find the z score, we will need to calculate the empirical AUCs, the variance V, and the covariance C. The following sections will show how to calculate these quantities.

Calculating the Empirical AUC for Model A and Model B

Similarly, we calculate the empirical AUC for Model B:

The next step needed for DeLong’s test is calculation of V10 and V01, which are referred to as “structural components” by Sun et al.

V10 and V01 will help us find the variance and covariance that we need to calculate the z score. V10 and V01 are defined as follows:

Recall that “r” represents which model we are considering, so we have different structural components calculations for r = A (for Model A) and r = B (for Model B).

For our small example data set, the structural component calculations for Models A and B are as follows: 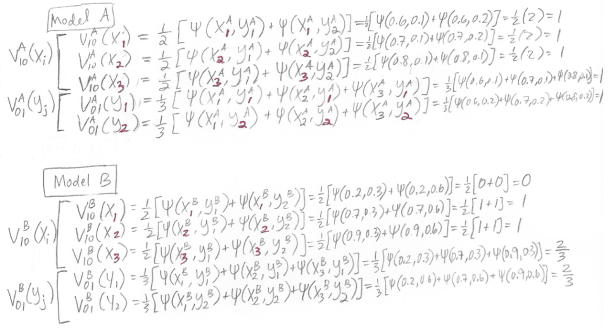 Next, we will use structural components V10 and V01, in combination with our empirical AUCs, to calculate the matrices S10 and S01 which are defined as follows:

The matrices S10 and S01 are k x k matrices, where k is the total number of models we are considering. Because we are only considering two models (Model A and Model B) each matrix will be 2 x 2.

Here are the calculations for the entries in the matrix S10:

It turns out that for matrix S10, all of the entries are zero except for the (B,B) entry.

Here are the calculations for entries in the matrix S01:

The matrix S01 ends up with all zero entries for this particular example.

Calculating the Variance and Covariance

Now we will use S10 and S01 to obtain a matrix S, where the matrix S contains the variances and covariance that we need in order to get our z score for the DeLong test. All we have to do to get S is sum together S10 and S01, weighted based on 1/ m=3 (the number of sick people) and 1/ n=2 (the number of healthy people) respectively:

Calculation of the Z Score

To calculate the z score, we plug in the values that we just calculated for the empirical AUCs, variances, and covariance:

Using the Z Score to Obtain a P-Value

Our calculated z score is 1. How do we obtain a p-value from this?

Alternatively, to avoid searching through a large table of numbers, we can use an online calculator like this one. We need to select “two-tailed hypothesis” and put in our z score of 1, which produces a p-value of 0.317311 (consistent with the result we got from the lookup table.)

Hand calculations are fine for tiny toy data sets, but for any real data set we will want to use software to compute DeLong’s test. One option is to use the pROC package in R.

Using the pROC package, we first create the two ROC curves to compare, using the roc function. The roc function can be called on a “response” (the ground truth) and “predictor” (the predicted probabilities) as roc(response, predictor).

For our Model A and Model B example, we have:

Now that we have built our ROC curves, we can apply the pROC roc.test function to compare the AUCs of two ROC curves.

This matches the result that we obtained manually above.

Another Example of DeLong’s Test in R

Here is another example of DeLong’s test in R, showing how the result is different when different ground truth and predicted probabilities are used:

The featured image is an Egyptian vulture. The original vulture photo was taken by Carlos Delgado CC-BY-SA and is available on Wikipedia here. The photo shown in this post has been modified to include AUC plots and equations related to DeLong’s test. The modified photo is distributed under the same license as the original photo.