This post will provide an overview of multi-GPU training in Pytorch, including:

Training on One GPU

Let’s say you have 3 GPUs available and you want to train a model on one of them. You can tell Pytorch which GPU to use by specifying the device:

To allow Pytorch to “see” all available GPUs, use:

There are a few different ways to use multiple GPUs, including data parallelism and model parallelism.

Using data parallelism can be accomplished easily through DataParallel. For example, let’s say you have a model called “custom_net” that is currently initialized as follows:

Now, all you have to do to use data parallelism is wrap the custom_net in DataParallel:

You’ll also want to increase the batch size to make use of all your available devices to their fullest extent.

For more information on data parallelism, see this article.

There are two steps to using model parallelism. The first step is to specify in your model definition which parts of the model should go on which device. Here’s an example from the Pytorch documentation:

The second step is to ensure that the labels are on the same device as the model’s outputs when you call the loss function.

For example, you may want to start out by moving your labels to device ‘cuda:1’ and your data to device ‘cuda:0’. Then you can process your data with a part of the model on ‘cuda:0’, then move the intermediate representation to ‘cuda:1’ and produce the final predictions on ‘cuda:1’. Because your labels are already on ‘cuda:1’ Pytorch will be able to calculate the loss and perform backpropagation without any further modifications.

For more information on model parallelism, see this article.

Pytorch’s DataLoader provides an efficient way to automatically load and batch your data. You can use it for any data set, no matter how complicated. All you need to do is first define your own Dataset that inherits from Pytorch’s Dataset class: 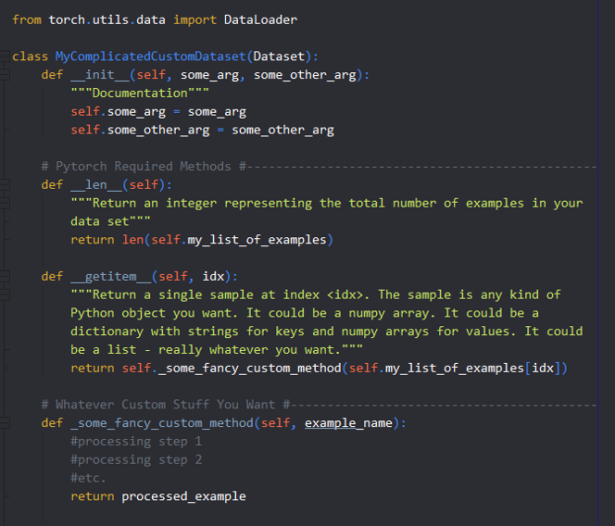 The only requirements on your Dataset are that it defines the methods __len__ and __getitem__.

Once you’ve created a Dataset, you need to wrap that Dataset in Pytorch’s Dataloader as follows:

In order to get batches all you have to do is iterate through the DataLoader:

If you want to accelerate data loading, you can use more than one worker. Notice in the call to DataLoader you specify a number of workers:

By default, num_workers is set to 0. Setting num_workers to a positive integer turns on multi-process data loading in which data will be loaded using the specified number of loader worker processes. (Note that this isn’t really multi-GPU, as these loader worker processes are different processes on the CPU, but since it’s related to accelerating model training I decided to put it in the same article).

Note that more worker processes is not always better. If you set num_workers too high, it can actually slow down your data loading. There are also no great rules about how to choose the optimal number of workers. There are numerous online discussions about it (e.g. here) but no conclusive answers. The reason there aren’t any great rules about how to choose the number of workers is that the optimal number of workers depends on what kind of machine you are using, what kind of data set you are using, and how much on-the-fly pre-processing your data requires.

For more information see “Multi-process data loading” on this page.

Training on a Subset of Available Devices

What if you want to use model parallelism or data parallelism but you don’t want to take up all available devices for a single model? In that case, you can restrict which devices Pytorch can see for each model . Within your code, you’ll set the device as if you want to use all GPUs (i.e. using device = torch.device(‘cuda’)) but when you run the code you’ll restrict which GPUs can be seen.

Let’s say you have 6 GPUs and you want to train Model A on 2 of them and Model B on 4 of them. You can do that as follows:

Or, if you have 3 GPUs and you want to train Model A on 1 of them and Model B on 2 of them, you could do this:

The featured image is a painting called “Harvesters” by Anna Ancher. It is in the public domain. Source: Wikipedia.

One thought on “Multi-GPU Training in Pytorch: Data and Model Parallelism”