The main reference for this post is the original paper, which has been cited over 2,500 times:

For any layer of a convolutional neural network, we can build a corresponding SE block that recalibrates the feature maps:

Figure 1 from the paper depicts an SE block:

Our input is an image X that has s channels:

We define a convolutional layer F_tr which consists of filters V:

We apply the convolutional layer F_tr consisting of filters V to our input image X.

To clarify the notation and the relationship between the input image X and the learned set of convolutional filters V, here is a quick review of 2D convolution for a multi-channel input image, in this case a 3-channel RGB input image.

The transformation F_tr includes multiple convolutional filters V=[v_1, v_2,…,v_C]. One filter for “2D convolution” of a 3-channel image is actually three-dimensional, as we can see from this animation where the sliding white outline represents a single filter, e.g. v_1:

Consider the RGB image X, shown twice in the picture below – once at the top with a pale orange filter v_1 overlaid, and once at the bottom with a purple filter v_2 overlaid:

We can see from the diagram above that a single filter is three-dimensional, measuring k x k x 3 for the 3 channels of X. In this example V includes two filters, the pale orange filter v_1 and the purple filter v_2.

Here are the filters labeled in detail:

By applying the filters V to input image X, we obtain output filter maps U:

A single output filter map, e.g. u_1 (subscript c=1), is produced by a summation through all channels (i.e. through superscripts s=1, s=2, and s=3). Only implicit channel relationships can be captured in this manner. To quote the authors,

Since the output is produced by a summation through all channels, channel dependencies are implicitly embedded in v_c, but are entangled with the local spatial correlation captured by the filters. The channel relationships modeled by convolution are inherently implicit and local (except the ones at top-most layers). We expect the learning of convolutional features to be enhanced by explicitly modeling channel interdependencies [i.e., with SE blocks].

(Note: following the paper, bias terms have been omitted to simplify notation.)

Now that we’ve reviewed the paper’s notation and 2D multi-channel convolution, here’s an explanation of how squeeze-and-excitation blocks work. They are surprisingly simple, requiring only global average pooling and fully connected layers.

The “squeeze” step in the SE block squeezes global spatial information into a channel descriptor. The squeeze step consists of global average pooling across the spatial dimensions H x W, to produce channel-wise statistics. Here’s an excerpt from the paper with the description and equation for the squeeze step:

The scalars [z_1,  z_2 ,…, z_C] together form a vector z of length C which will be used in the excitation step. Note that that z captures global information in the sense that each element of z is produced by an aggregation across the full feature map height H and full feature map width W.

The excitation operation is intended to fully capture channel-wise dependencies. The excitation operation processes the output of the squeeze step (the vector z) to produce a vector of activations s, which is then used to re-scale the feature maps. (This activations vector s is not to be confused with the s that was used earlier to keep track of the channels of input X).

The vector s is calculated from the squeeze output z using two fully-connected layers with a bottleneck that takes the representation down to size C/r:

The hyperparameter r is referred to as the “reduction ratio.” If r is bigger, then the intermediate representation is smaller. The goal of reducing the size of the representation to C/r and then expanding it back up to C is to (a) limit model complexity and (b) aid generalization. As the authors put it, the reduction ratio r “allows us to vary the capacity and computational cost of the SE blocks in the network.”

Here is a sketch of the first part of the excitation step, in which the activations in s are calculated from the squeeze output z: 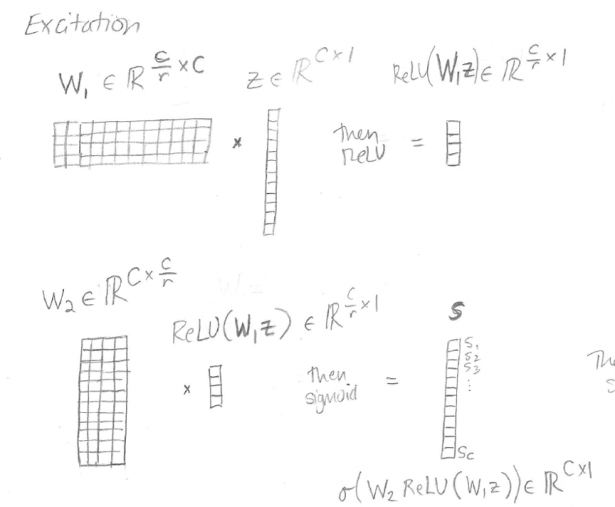 Once s is calculated, the elements of s are used to rescale the feature maps of U to obtain the final output of the SE block, termed X-tilde:

Here’s a sketch of the final step:

As you can see from the sketch, the activation s_1 has to be tiled across the H x W map u_1 so that s_1 element-wise multiplies all the values in u_1 to produce x-tilde_1.

The stack of recalibrated feature maps [x-tilde_1,x-tilde_2,…,x-tilde_C] then continue through the rest of the CNN, as they are exactly the same dimension as the original feature maps [u_1,u_2,…,u_C].

Thus, SE blocks add a form of self-attention to the CNN:

SE blocks intrinsically introduce dynamics conditioned on the input, which can be regarded as a self-attention function on channels whose relationships are not confined to the local receptive field the convolutional filters are responsive to.

A squeeze-and-excitation block can be plugged in to any CNN architecture. Figure 3 from the paper illustrates how to use an SE block in a ResNet:

Here’s an example implementation of an SE block (source):

Additional takeaways from the results section:

The featured image depicts fireworks over Sydney Harbor and is by Rob Chandler (Wikipedia CC by 2.0) because fireworks are exciting and so are squeeze-and-excitation blocks.