It is useful to be familiar with basic chest anatomy when analyzing chest x-ray or chest CT images. First I’ll do an intro to the different organs and structures in the chest, and then I’ll go over some images showing their locations.

Organs & Structures of the Chest

Pictures of the Chest 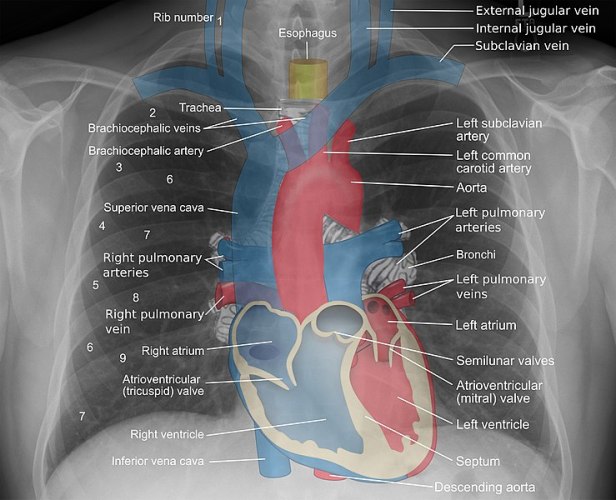 Diagram of the Mediastinum (Image Source.) In the diagram above, the blue and red colors indicate the heart and great vessels. The blue parts carry deoxygenated blood and the red parts carry oxygenated blood. The red tubes and the blue tubes on the top are huge blood vessels. You can see the red aortic arch with three other blood vessels coming off of the top. It is hard to see the windpipe (trachea) in this picture because it’s behind all of the blood vessels and the heart. You can see the four chambers of the heart: the right atrium, left atrium, right ventricle, and left ventricle.

Diagram of the Lungs (Image Source.) In the diagram above on the left, you can see the ribs and the “intercostal muscles” (muscles between the ribs), which are completely covering up the whole lung, except for the very tip of the lung (it’s drawn in pink; you can see it poking out at the top). On the right, the ribs and the intercostal muscles have been “removed” so you can see the entire lung. The outside of the lung is covered in the pleural sac, also known as the “pleura.” Below the lungs you can see the diaphragm, a big dome-shaped muscle. When you get the hiccups, it’s because your diaphragm is spasming.

Another Diagram of the Lungs (Image Source). The very top of this image is your larynx, where you have your voice box. If you speak and place your hand over your throat you can feel the approximate location of your larynx. Below the larynx is the windpipe (trachea), which splits into bronchi. The bronchi split repeatedly until they become bronchioles, which are about one millimeter or less in diameter. Actual exchange of oxygen and carbon dioxide happens in minuscule sacs called “alveoli”; these sacs are the final destination of the air you breathe in.

I am linking to these diagrams instead of pasting them here because they are copyrighted images.

3 thoughts on “Anatomy for Radiology: Chest”